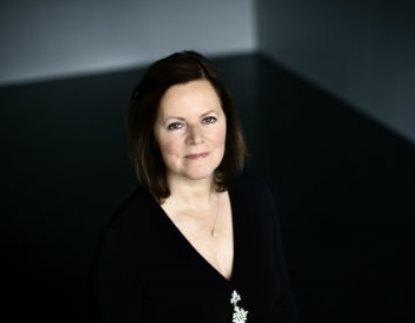 Born in Lancashire, Kathryn studied at the Yehudi Menuhin School and the Royal College of Music. Her teachers included Nadia Boulanger, Vlado Perlemuter and Kendall Taylor.

A regular visitor to international festivals both as soloist and chamber musician, Kathryn has constantly performed around the world since 1978, when she was a prize winner in the Leeds International Piano Competition. In recent years, she returned as soloist to the BBC Proms  and Wigmore Hall in London and toured the UK with cellist Giovanni Sollima. One particular highlight was a series of performances with JP Jofre and his Hard Tango Chamber Band in New York. 2015 began with a highly successful series of concerts in New Zealand and continued with an extensive solo tour of Australia. She will be returning to both countries in 2017.  As a way of celebrating their 30 year partnership, Kathryn and Yo-Yo Ma recently recorded 'The Arc of Life' and subsequently toured the Far East and the USA.

With a vast repertoire, Kathryn has maintained a keen interest in contemporary music and has had many works written especially for her. In particular, her close musical relationship with the composer Graham Fitkin has led to 7 World premieres. She is a remarkable exponent of Tango and other Latin dance music, reflected in her collaboration with Yo-Yo Ma and leading South American musicians on the Grammy Award-winning Sony CD ‘Soul of the Tango’ and its successor ‘Obrigado Brazil’. In the recording studio she has created a large and eclectic body of work including concertos and solo repertoire. Her most recent release is 'Solitaires' on the BIS label and features works by Dutilleux, Messiaen, Ravel and Alain. Also of particular note is her recording for Hyperion of the complete solo works by Fauré and the complete Kabalevsky Concertos for Chandos. Apart from her CDs with Yo-Yo Ma, she has also recorded with Truls Mørk, Christian Poltéra, the Hermitage String Trio, Guy Johnston, the Doric string quartet, Noriko Ogawa and Tine Thing Helseth.

Kathryn Stott has been the artistic vision behind several major festivals and concert series. ‘Piano 2000’ and ‘Piano 2003’ ( Bridgewater Hall, Manchester) established her reputation as an astute programmer; and following the earlier ‘Fauré and the French Connection’ she was appointed Chevalier dans l’Ordre des Arts et Lettres by the French Government. From 2009 - 2014 she was Artistic Director of the Manchester Chamber Concerts Society and was Guest Artistic Director of Incontri in Terra di Siena in 2010 and 2011. Kathryn curated a series of 6 concerts called ‘Dance!’ for Leeds International Concerts in 2014.

In 2008 Kathryn celebrated her 50th birthday with 25 musician friends raising £30k for HIV research and Nordoff-Robbins Music Therapy. Besides her performing commitments, Kathryn has also been a Board member of the Hallé Orchestra, a position she held for 7 years. In addition to her busy career as a performer, she is a visiting professor at the Royal Academy of Music in London, holds the position of International Chair at the Royal Northern College of Music in Manchester and regularly visits Chethams School of Music. From August 2016, Kathryn will join the piano faculty of the Norwegian Academy of Music in Oslo. Kathy Stott has a daughter, Lucy, and lives in Manchester. A keen walker, she enjoys being out in the countryside and spending time with her working cocker spaniel, Archie.